NLA in partenship with Metaform and CH Arq&Urb, won the international competition promoted by LUX Development for the concept of a professional training School in Renewable Energy and Industrial Maintenance in the city of Praia at Cape Verde. The building concept is based on the use of prevailing winds and solar energy as a key to the bioclimatic design of the building.
A large curved roof floats over the complex providing shelter to direct solar radiation. Three buildings surround a central atrium that distributes all circulation to the different functions.
On the passive side are the building’s correct orientation, use of natural ventilation, solar shading devices, thermal insulation, and natural indirect lighting.
Photovoltaic panels will produce electricity to be used by the Center, to be also stored in the public network. Wind generators, and an absorption chiller for cooling completes the technical part of the building, that will also be used for demonstration and training purposes.
The works on site will commence later this year. 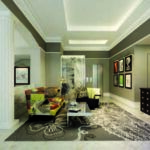 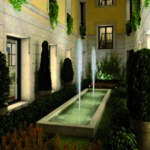